I feel like I’ve suddenly clicked with the roguelike indie genre, a few years late, and now I’m working my way through it in reverse chronological order.

Hades is superb, with art and writing to match the gameplay, and I’ve played through it enough times to reach ~5 heat with most of the weapons. When we were in managed isolation in early November, it was one of my coping strategies for being stuck in a room with my girlfriend, both working full-time and on video calls, for two weeks. 1

Slay the Spire is also a great game. I tried it a few years ago on iOS, but didn’t really grok it2 until seeing Firebat’s thunder strike combo run last week. It’s the first deck-building game I’ve enjoyed. The card game Dominion is many people’s first introduction to the concept, and it’s all very well, but playing it with other people means you can’t just slow down and really think about your turn.

Although… I did get into Faster Than Light when it was released, and again when they released a free full expansion (!). It also has the core gameplay loop of playing through a map, facing discrete encounters, and accruing loot, abilities and scars. It can be unrelenting at times, where a run of bad luck can throw away an hour’s play, and I ended up playing it on its easier mode for more enjoyment. It also had enough original ideas that Door Monster did a great sketch about it.

Actually… I lied, Hearthstone’s dungeon run mode was probably my first introduction to a fun deck-builder. It takes a game you already know well, with familiar mechanics and art, and then sneaks in cards and abilities, and suddenly you’re vastly overpowered but facing a boss whose mechanics you didn’t anticipate, and trying to figure out how to stay alive one more turn and hang on to the deck you just spent an hour building.

One thing I’d like to see explored in the genre is valuing the player’s time. If you die in a run, you lose a state that you’ve probably spent half an hour assembling. That does introduce a tension which helps make the battle feel meaningful, but… for a working stiff, with finite leisure time, it would be nice to have a “rewind” button.

Dark Souls was really satisfying to learn and get right, and just as unrelenting when you got it wrong, but I never even managed to finish the first game because it also uses this tradeoff of leisure time for tension. It’s very effective, but so costly.

Oh, and one more thing, which seems to be an original thought; Slay the Spire’s boss music put me so strongly in mind of One-Winged Angel that after finishing the last battle, I couldn’t remember the actual music, but I did now have One-Winged Angel stuck in my head. It’s a legendary track, and if you’ve never heard it (Ben) then it’s worth a listen. But when I went looking for discussion on it, I found none. Shame - you always wonder if someone can explain precisely what makes them similar, in fancy music words. 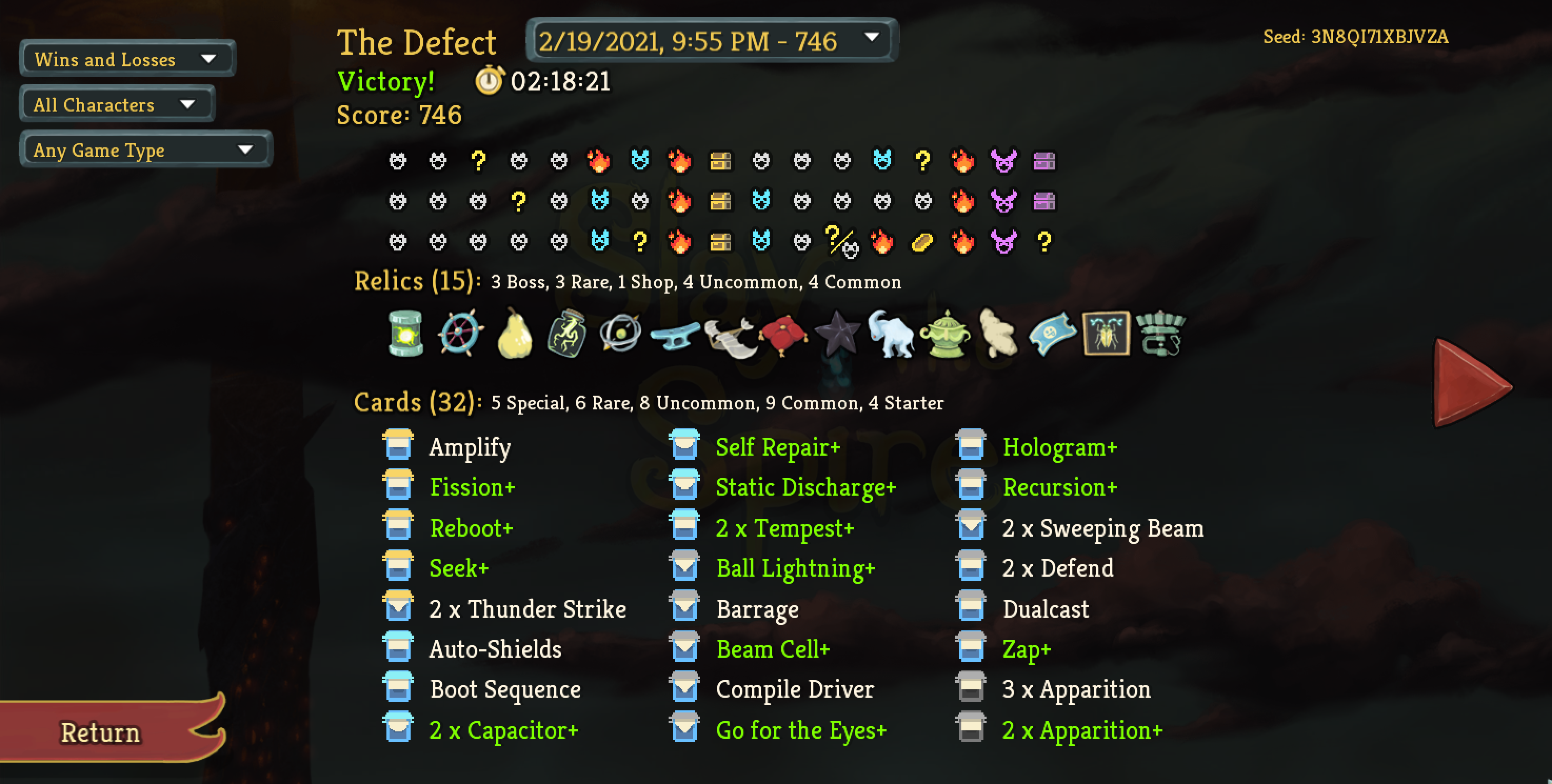