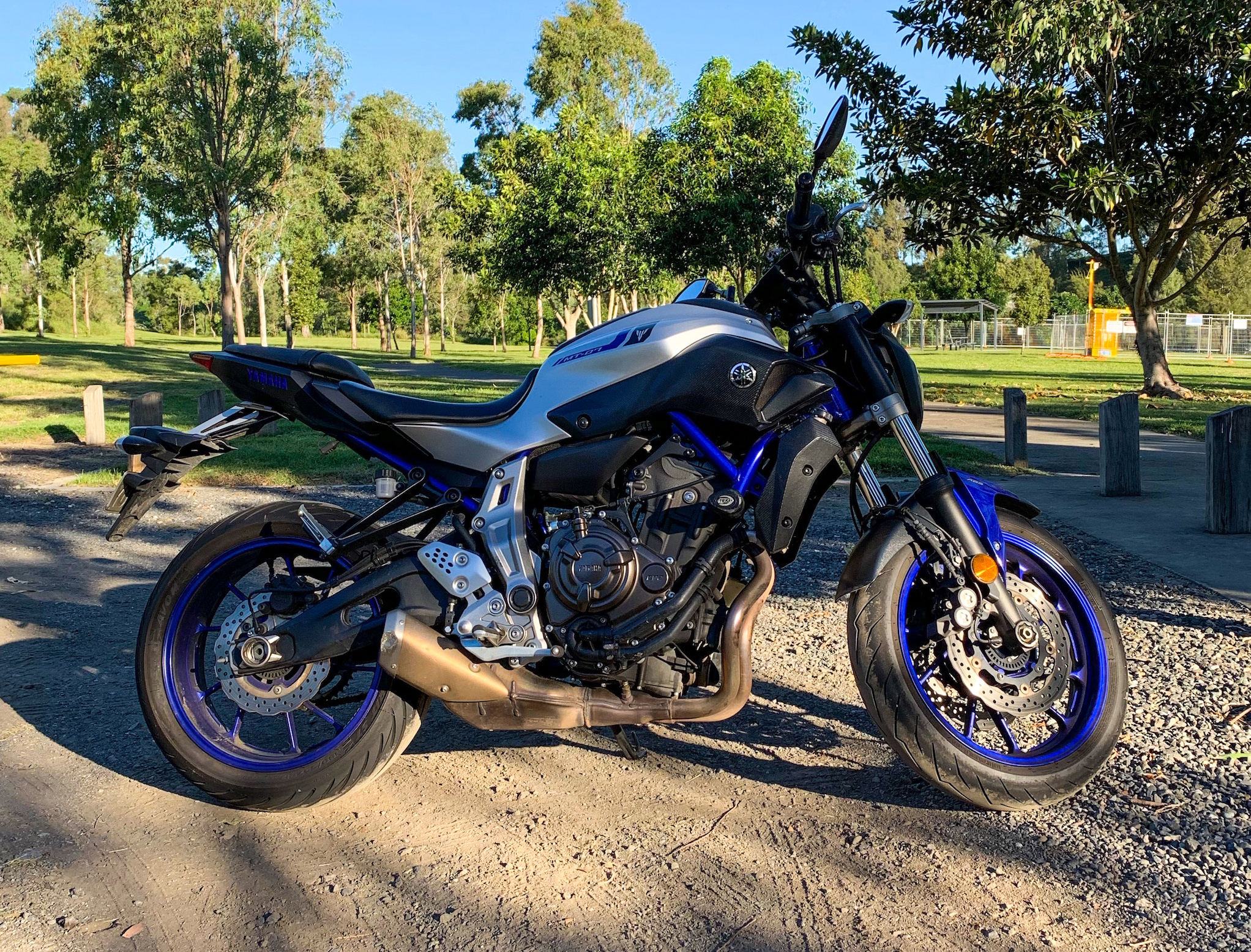 “Try to take off without the throttle for a bit,” advised the owner of the bike shop. “We’ve had someone flip this before - we reckon he stalled it a few times then revved it and dumped the clutch.”

As parting words go, there have been more reassuring.

I’m just finishing up the rental of a Yamaha MT-07 LA, and a better use of money is hard to find. Here are some scattered thoughts.

The Yamaha MT-07 LA is one of the top-end bikes available to riders with a restricted license in Australia. With a restricted 655cc engine making about 50hp @ 8,000rpm and 55Nm @ 4,000rpm, it doesn’t feel like a learner bike. There’s a high-output HO version which adds another 25 horsepower at the top end.

I learned on a succession of 125, 150 and 250ccs. While lightweight, and still faster in a straight line than an average car, you really have to wring them out to get up to speed.

The Mazda MX-5, enthusiast’s friend, is notorious for its “slow car fast” experience. A low-slung, under-insulated convertible has a knack for keeping things raw, which makes every driving speed feel faster. Lipstick on a piglet, if you will.

A motorbike takes the lipstick and applies foundation, concealer, blush and maybe a little mascara.

I mean, motoring journalists talk about flooring a Mustang and being pressed backward into the bucket seats. But the first time you open the throttle on a motorbike and feel yourself start to slide off the seat a little, it sets a new benchmark. 1

Also, cornering is weird. Countersteer is weird, leaning is weird, and the thought of dragging a knee or scraping the footpegs scares the crap out of me. I can do it, but the rational mind doesn’t understand what’s going on and occasionally raises a complaint. 2

Much, much stronger on a bike. Maybe because they rev higher? Even when going down quite a steep hill, you might want to press the brake a little just to flash the brake like so cars behind know that you’re slowing.

Cars have three big mirrors which don’t move by themselves. Bikes have two smaller mirrors which will occasionally fold in the wind. Having a mirror to see directly behind you is really something you miss.

The worst that can happen to you when you’re stopping a car is that you stop too far forward and get swiped, or you mess up the clutchwork and kangaroo-hop 3 a few times. By comparison, if you’re not paying attention when you stop the bike, you can end up with 200kg resting on your boot. This is embarrassing.

All the gear, all the time, but it sure gets old putting on five kinds of armour before you can hop on. Short journeys start to feel like they’re not worth the effort. And in summer, you’re sweating before you even get started.

People can mostly see your car, although it’s still not a safe assumption. On a bike, you’re less wide and have fewer lights. Cautious rider trainers will tell you to do a little wiggle on the bike when you want to increase your chances of being seen (eg: approaching an intersection, when a car’s coming towards you, or in traffic). That wiggle just wouldn’t feel right in a car.

Driving a softened-up economy car with a turbocharger means you get used to pressing the accelerator and waiting a moment for much to happen. Bikes are much more raw, and as soon as the throttle passes the dead zone, they’ll give you their best. It takes a moment, when going from one to the other, to mentally recalibrate.

If you enjoyed this, check out the Mustang post too!

The start mentioned at the start might have looked a bit like this, although the bike in the video has about four times the power.